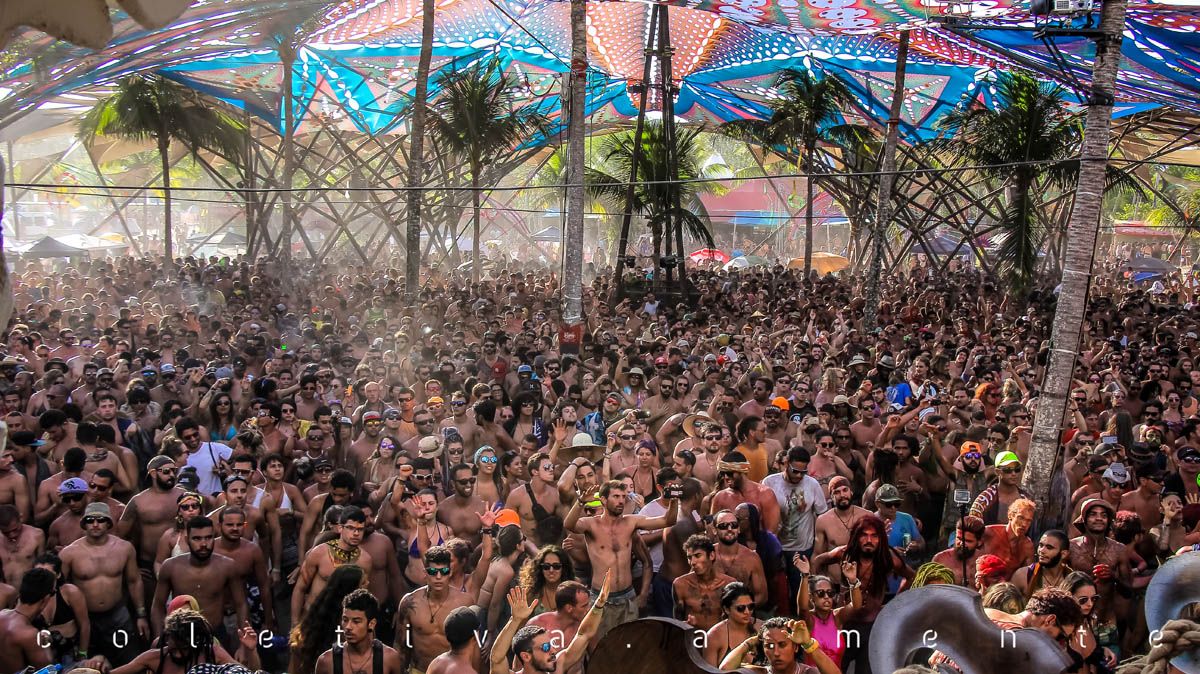 Universo Paralello happened Between December 27 and January 04, at Pratigi, Bahia, the 12° edition of the biggest electronic music festival in Brazil, and one of the biggest in the world! Pratigi has amazing energy, this place is amazing! It has one spectacular beach, with white sand, hot water, where we don’t see pollution, one true sanctuary of natural beauties. The local population is a charm, everybody simple and happy, with the opportunity to receive so many tourists and can work at the festival.

The infrastructure of the festival was really good; receive 20.000 people, for seven days, for sure, it’s not an easy job. The festival had a lot of camping areas, with a lot of showers, making it possible that we do not wait so much time for taking a shower, and we could refresh between the walk from one stage to another. The emergency unit from the festival offered the right conditions for the public, with ambulances and other cares.

The food spots offer the most different varieties of foods: acai, juices, pizza, hamburger, pasta, stroganoff, Yakisoba, and vegan food… Some spots had people talking English, which was very important because of the number of foreign people that the festival received. In the camping, we could listen to people talking in English, Spanish, and other languages that I could not identify, making possible a lot of different cultures inside our celebration. I confess that was the point that most call my attention, because another festival here in Brazil, most of the foreign people came only to play, and this time, a lot came just for having fun, making our dance floor beautiful, with a lot of ethnic!

The Universo Paralello’s dance floor showed that everybody is the same, and people with deficiency, physic and mental, can have fun just like us, or even more! We were at the festival a lot of Indigenous people, showing a little about their culture, handicraft, body paint, and sometimes, going to the dance floor with us. Another point that worth talk about was the presence of beautiful children at the festival, making one happy celebration! The kids had fun with recreational activities, games, and classes with circus teachers, trampoline, and many more. So, Universo Paralello offers harmony and fun for all people of all ages. I also could note the presence of beautiful dogs, showing that the festival is one union with all beings.

The parallel city also had caress areas, massage, acupuncture, where happened Yoga classes, slackline, circus activities, art exposure, theater and movies. Love was in the air, the festival was the place where some couples married! We could see in the festival some naked bodies, showing once more that Universo Paralello is one place where the respect is mutual! The decoration was made by recycling materials, what was garbage one day, can be in the next something really beautiful. The festival had six stages, Main Floor, 303 Stage, UP Club, Tortuga, Chill Out, and Parallel Stage, with a lot of artists and styles.

The Main Floor was far away from the beach, because the return of sound, but thinking about our welfare, the dance floor had one irrigation system, throwing water all day, leaving a good and fresh ambient. The responsibility to open the Main Floor was of the Italian Hypogeo, and he rocked it! He played his unique and heavy music style, pleasing the public from this Stage that gives special attention to Psy Trance. The festival book said: There is where the meditation, the magic in biggest intensity happens! The skull figure won life and color at night!

By morning the Goa Trance started, which is a style that we don’t find in so many parties here in Brazil, only in few festivals. I never saw the dance floor so beautiful, with good vibes; people having fun, dancing, and getting dirty, why not? The Zim was constantly thrown on the dance floor, and brought colors, happiness, and fun!

Big names played there, from Old School to the new genres, to name some: Merkaba; Bamboo Forest; Electric Universe; Laughing Buddha; ESH (Hujaboy); Penta; Cosmosis; Avalon; Etnica; Altruism; Burn in Noise; The Green Nuns Of The Revolution; the project from one of the biggest names from Electronic Music, Dick Trevor; Circuit Breakers, the union of Dick Trevor and Burn in Noise; the British DJ Lucas, that bellows to one of the most important Records, TIP World; Liftshift; Braincell; Brainiac; Materia; Ital; 28 Live, project of Pedrão and Shove; the Serbians Zyce and Flegma; Lyctum; Perfect Stranger; Dropped, project of Element and Mental Broadcast; the duo Yage; Digoa; the brothers Alok and Bhaskar from Logica; Second, that is the couple Bhaskar and Priscilla; Ekanta; Pspiralife; Rica Amaral; Psychowave; Twelve Sessions; DJ Moon; Earthspace; Back To Mars.

The one chooses to play in the New Year Eve was one legend from Progressive Trance, Atmos! He harmonizes one long introduction with the fireworks, playing his hits of Progressive Trance, like Horizon Of The Pickled Coffin, and also of Progressive Goa Trance, like The Only Process, and finished with his remix of the beautiful track from Z to A – Next Stop: Oblivion. One big surprise on the Main Floor was the Brazilian project Formatick that mix Electronic with guitars. That is a good point at the festival, someone can meet new projects with quality!

The 303 Stage was the favorite area of a lot of people because was next to the beach, with a fresh air and a beautiful vision! The stage also had a lot of great artists: The First Stone, the union of Swarup, Zumbi and Burn in Noise; Mindfold, the project of Brainiac and Materia; Rinkadink; Hujaboy; Solar Spectrum, parallel project of Braincell; Osho; Flip Flop; Element; Capital Monkey; Wega; Diza Vs Errado; Magma Ohm.

The responsibility to close the festival, would not be different, was of the owner and organizer of the festival, Swarup! He ended perfectly; with the chapel of the music Metamorfose Ambulante from Raul Seixas, in Spanish, given by his daughter, DJ Vivi Seixas.

Was such a pleasure to be part of this big celebration, met old friends, and meet new ones, from all over the world! Definitely, I hope to come back in the next edition, in two years, and I want to thanks Juarez Petrillo, for making possible the chance to be there, and bring this report to you, from the magic days that I lived there, in this paradise called Universo Paralello!