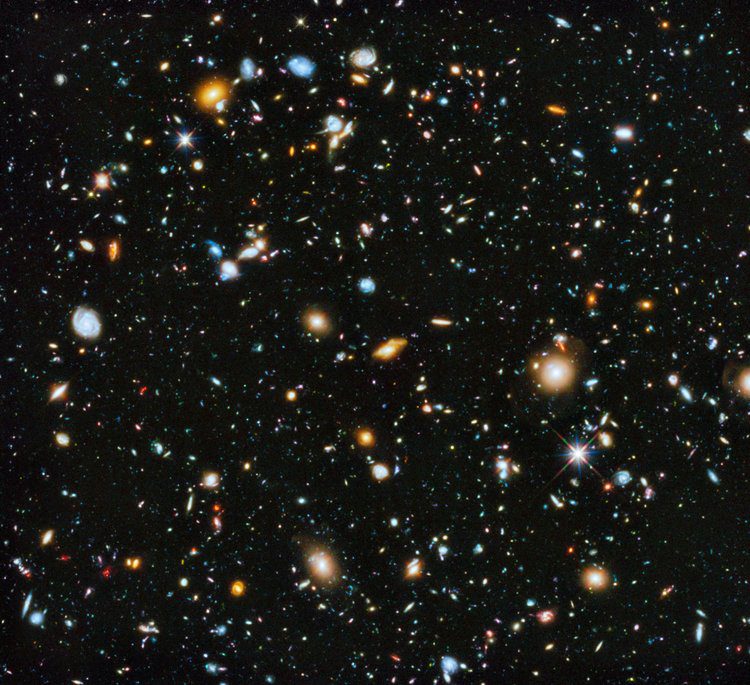 This is the photo that once upon a time blew me away forever and still, my imagination runs wild when I see it: every little dot of light in this photo it’s a GALAXY. Like our own galaxy the Milky Way, which said to have about 120 billion stars like our sun (Note: to count an object as a star needs to have at least some planets in orbit). Fact: This is actually just the 1/10,000 of the actual photo, taken by the Hubble Telescope, I think in 2009. We saw this spectacle for the first time just before some years! Imagine this 10,000 times bigger and then imagine by taking this photo, we snapped just a tiny little dot of what’s out there.

The numbers are mind-blogging. And then imagine that all we do as a species is bombing each other… For Gods that we invaded, for money that we printed, for borders that we have set upon a flying rock, amongst gazillions of other, flying rocks. I believe we are more than that. We need to be more. Although the big numbers the human mind can’t even begin to grasp, the evidence for intelligent life forms is not so optimistic. Still, we haven’t figure out what makes the intelligent species… Intelligent!

We don’t know how this “click” happens when a species can turn from an animal form life to being a species able to make wheels until these wheels break the DNA code and/or travel him to the moon and back. Scientifically isn’t proven yet. This kind of intelligent doesn’t seem to come with “Evolution”. Evolution can get you only that far. As far as being a brilliant dog, or a devious cat, or a smart bird. After there, we just don’t know. We can’t even be remotely sure that on each planet that life may have form, one species will evolve further, as being intelligent, equally to human species or higher. I think the actual guessing number, amongst astrophysicists and such, is “1 in a trillion”.

So with a rough calculation of the trillions of planets out there, we may be speaking for just some dozens of intelligent species, spreading across hundreds of billions of galaxies, with a time-frame, that they may have lived and flourished, over 12 billion of years! That we know. Nothing sounds optimistic, right?

Well… Wrong! We think and calculate everything with the boundaries and the principles that we have set for our minds as a species. Let’s take as an example a rock-steady tool of proof over the millenniums, the Mathematics. We say that mathematics is a universal language. That is true. We discover almost everything with equations before we see it with our own eyes. But how we know that we speak this language fluently and we aren’t still in the baby steps? Or even better, to make it more variant for you, how we know that this language governs everything? Just because we say it? It seems that it does, but, when we said that life can’t live without oxygen or under a certain atmospheric pressure and we proved it with mathematical equations, we went on and dived to the deepest of our oceans and we discovered lifeforms living in extreme conditions and feeding with things that thought to be impossible until we saw it with our own eyes.

There’s a myriad of examples and can go on until the very new year, but that’s not the point. The point is, how do we know? How do we know when we don’t know what is this “Dark Matter” that, although yet never directly observed, commonly accepted as widely present in the universe and has shaped the universe’s structure? Where’s our fluency in the universal language there? Secrets not yet unveiled. So, to get back to the subject, that numbers for intelligent species out there may be real if we only accept that the things are as we think. This image that we’ve talked about, is captivating human imagination as few things in the past did. Still, every galaxy we see in that photo and try to imagine out of all the trillions of planets inside each of them if there’s intelligent life anywhere, nothing can make us believe that these galaxies are governed by the same rules as our galaxy.